-were the galxy's most numerous and politcally dominant sentient species with millions of colonies galaxywide. Believed to have originated on the galactic capital of Coruscant. Since humans were the most common sentient speceis, they were often considered to be a standard or average to which the biology, psychology and culture of other speceis compared.

Are humans with cybernetic implants to fix serious wounds or to enhance certain aspects (facial customization options only).

Force-sensitve species. Thier language was Miralukese, although some, like Visas Marr and the Dark Jedi Jerec, preferred Basic.

-were a Force-sensitive species of red-skinned Humanoids that originated on Korriban and later settled on Ziost and were enslaved by exiled Dark Jedi.

-were a humanoid species native to Iridonia, a planet located in the Mid Rim known for its inhospitable terrain and fierce predatory life. They were a r 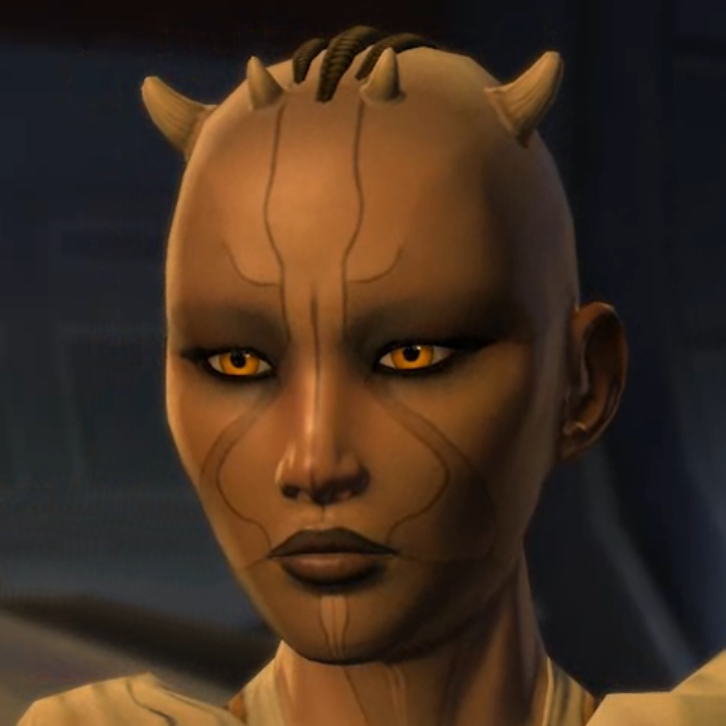 ace known for having a fierce sence of self-determination and an equally dominant need for independence. Their are 2 types of breed of Zabrak that nearly side both the republic and the empire almost evenly.

-were a species of Near-Humans native to the planet Mirial. Thier appearence varied from yellow-green skin to paler skin very similar to many Humans. Mirialans were very flexible and agile, making them fast and formidable foes.

mnivorous humanoid species originating from the planet Ryloth. They tended to eat cultivated molds, fungi, and rycrit meat. Thier distinctive features included colorful skin, which varied in pigment from individual to individual, and a pair of shapley prehensive tentacles that grew from the base of their skulls. They possessed a fairly standard humanoid vocal structure and were capable of learning most alien languages. Twi'lek females were often used as slaves or dancers because of their legendary beauty.

-were a tall, blue-skinned Near-Human cvilization from the Unknown Regions, best known as the people to which Grand Admiral Thrawn belonged. Due to the remote position of thier home territory in the Chiss Ascendancy they remained largely an enigma to the rest of the galaxy, and contact with outsiders was limited even in the days of the Galactic Alliance.

-were a Near-Human species characterize

d by thier chalk-white skin and bald heads, similar to the Umbaran race. Virtualy isolated from the rest of the galaxy, the Rattataki developed a violent society on their home planet of Rattatak, which involved extensive  gladitorial combat.

-were a race of feline, bipedal humanoids native to Cathar, a planet of savannas and rough uplands. They were known for their loyalty, passion, and temper. Quick and powerful, they were considered great warriors and dedicated, efficent predators. Cathar had high moral values, learned from both family and society. Thier females were prized as slaves, whereas the males were generaly regarded as too uncontrollable for slavery.

-were a humanoid species f

rom the planet Shili. The race exhibited head-tails which were similar to those of Twi'leks, perhaps suggesting a common ancestry. Togruta were also distinguished by montrals, large hollow horn-like projections from the top of thier heads, that gave the species a form of passive echolocation. They worked wel in large groups and individualism was seen as abnormal within their culture, although it was also a necessary quality in leaders.

-were a horned humanoid species from the world of Devaron in the Colonies, a planet of low mountains and deep valleys linked by thousands of rivers. It is believed that they were descended from a race of primates that lived in the mountains of Devaron, and that thier horns were a genetic mutation that proved useful in fending off predatory birds.

-were distingushed by two fleshy growths protruding from the sides of thier heads, which they called lethorns. As they aged, the lethorns would thicken. Males soprted two horns growing from the top of their skulls. These were once used in underwater duels to attract a mate, and were seen as a sign of the males strength and virility.

-were a reptillian humanoid species from the planet Kintan in the Si'Klaata Cluster with many subspecies.

-were a sentient humanoid species from the Voss system. Thier totalitarian society was defended by commandos who served as seers and healers and whom the other members of the species considered infallible.

Their population was small, vastly outnumbered by their homeworld's other na

tive group the Gormak.The Empire attempted to conquer thier home planet, so the Republic moved in to defend the world from Imperial assault. The Voss Mystics, forewarned by thier gift of prophecy, revealed themselves and were able to fend off both occupation forces. Following their mutual defeat, the Empire and Republic established embassies in Voss-Ka their Capital city, in an attempt to curry favor with the Voss.

-were a species hailing from the technological planet Dorin. They required masks to protect them when in oxygen-rich atmospheres. They were also known for the unique Force-using traditions of the Baran Do Sages.

-were an amphibious humanoid species from the planet Glee Anselm. Although they established settlements across thier aquatic homeworld, most Nautolan civilization was found in the Sabilon region. They were well known for

thier exotic tenticles on thier heads. Rumored that they could comunicate in leku with Twi'leks as well.

Most Likely Not Playable or confirmed non.

-were a humanoid species native to the planet Duro. Who were among the galaxies first space faring civilizations. Their home world was located on both the correlian trade spine and at the endo of the Duros space run, two major hyper space routes that linked Duro with other important comercial centers.

-were a reptillian humanoid speceis native to Rodia in the Tyrius system. Highly recognizable due to characteristics in facial structure and skin pigment, Rodians were infamous for their violent culture, which sprang from the difficulties of life in the jungles of thier homeworld. Though the were often relegated to the fringes of galactic society as bounty hunters or criminal henchmen, Rodians were not merely simple-minded thugs. The Rodian people managed to produce artists, merchants, and politicians who were found even among the upper classes of the Core Worlds.

-were sentient humanoids native to the planet Voss, a world in the Voss system of the Allied Tion sector in the Outer Rim Territories. They were more populous of thier homeworld's two native sentient species- and they were extremely hostile toward the Voss and see off worlders almsot the same as they treat the Voss. Embassies were established by the Empire and the Galactiv Republic to curry favor with the Voss alone, an oversight that angered the Gormak. The Gormak built mines, settled in camps, and scavenged stolen tech for their weapons and spacecraft.

-were large, bipedal reptilian humanoids from the planet Trandosha. They had super-sensitve eyes that could see into the infrared range and the ability to regenerate lost limbs, although very slow, and were anatomically built heavier and stronger than most humanoids, including Humans. They would also periodicaly shed their skin. They had no tails, and were a warlike species who allied early with the Empire, taking Wookies as slaves, some have been known too have allied with the republic for personal issues.

-were a fish like race, one of the sentient species indigenous to the world of Dac.

The Wookiees, whose name for themselves translated to the People of the Trees, were a species of hairy bipedal humanoids that were inhabitants of the planet Kashyyyk. One of the most noteworthy members of the species was Chewbacca, Han Solo's best friend and co-pilot, who played a vital role in the Galactic Civil War and afterwards.

Zotz is the leader of the guild republic of three